If you’re anything like me, you probably scoff at the “lifespan of a couch” being 7-12 years. In fact, the idea that a couch has a lifespan at all was a bit of a foreign concept until recently.

Hopefully, however, you’re not like me and your family had more than one couch the whole time you were growing up. Luckily, my brother and I put on enough weight that that couch ultimately met its demise when he and I (with 3 other friends) were piled on it to watch a movie. For some reason that 20-year-old couch wasn’t quite up to having 1100 pounds of rambunctious teenage boys on it.

While, of course, left my parents with a dilemma. Do they spend a bunch of money on an expensive high weight capacity couch? Since my brother and I were just about out of the house should they just get a normal couch and count on it holding our weight for a couple of months? Of course, they couldn’t answer either of those questions until they had the key piece of information: what is the weight capacity of the average couch?

Couch weight capacities are typically given on a “per seat” basis and range from 200-300 pounds. A typical three-seat sofa will have a weight capacity of 750 pounds. Options such as a pull-out bed or reclining mechanisms typically lower the weight limit as far as 180 pounds (per seat) while 350 pounds is possible on a heavy-duty couch.

Armed with that information, my parents (and I, a couple of years later) were ready to go out and couch shop. Unless you are obese (or have a family member/friend that is) you can probably get buy for a while with a normal couch. However, a heavy-duty option with a high weight capacity will always last longer than a run-of-the-mill machine-made option.

How To Tell The Weight Limit Of Your Couch

Unfortunately, there is not an industry standard for either testing or reporting the weight limit of a couch (or other furniture for that matter). Because of this many furniture makers avoid giving a weight capacity of their couches.

If you are shopping for a couch, the weight limit is sometimes listed in the specifications of the couch or, if you have a couch already, on the furniture tag. If you can’t find it in either place but think you might be over the weight limit of a couch you can call the manufacturer. Even if they don’t publish the numbers that can almost always tell you what they think the capacity is.

However, unless a couch is specifically made to hold higher weights (or is just a high-quality couch) it is likely that it is around the 250lbs per seat mark.

What Happens If I Exceed The Weight Limit Of A Couch?

3 Things That Give A Couch A High Weight Capacity

If you are unable to get a straight answer from the furniture store or the people who made the couch (or are shopping used) there are several things you can look for that will give you an idea of the couch’s weight limit. It should come as no surprise that these are simply the fixes of the above problems:

At the end of the day, you’re probably not going to have huge problems with whatever couch you buy. Couches with a high weight capacity will typically last longer and be a better value for your money but you can get buy with something off of Craigslist as well.

With that being said, I think that everyone should at least take the weight limit into consideration when buying a couch. Sitting down on a couch (or rough-housing/jumping if you have kids) can place 2x your weight on the couch momentarily. I bought a couch that wasn’t specifically marketed to overweight people but, according to the specs, could support my whole family.

The Best High Capacity Couch for Big and Heavy People: 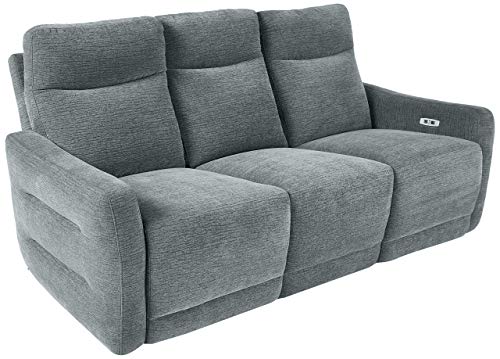 When my wife and I were shopping for high-weight capacity couches we were pretty bummed about how ugly most of them were. Not so with this one. It is a super modern-looking option with a heavy-duty polyester cover, motorized reclining mechanisms (don’t worry, they’re strong), and high-quality cushioning. Even with the reclining motors, this couch is rated at 900 pounds. While this isn’t stated explicitly I imagine that this means it has a 300 pound capacity per seat (although I’ve had much heavier people on mine).

There is the added benefit of being able to order this couch directly from Amazon (with matching armchairs if you like) and avoiding salesmen and complicated delivery issues. All in all, this couch isn’t perfect but if you need the weight capacity, it gives you all you can hope for!

We also researched and recommend 3 other great heavy-duty couches if this one isn’t quite right for you. Check out that article here.

The 4 Best Couches For Big & Heavy People (Match Any Décor)

The 4 Best 400lb Capacity Kayaks For Plus Size People

The 4 Best Mattress Toppers for Heavy People (300lbs or more)